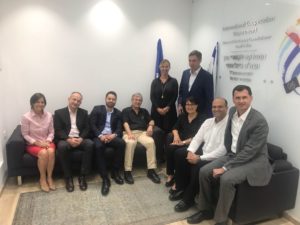 Expert delegation from the Forensic Science Center „Ivan Vučetić“ of the Croatian Ministry of the Interior, led by its director Andrea Ledić, visited the israeli colleagues from the Division for Identification and Forensic Sciences (DIFS).

Following a recent meeting of Israeli Minister of Public Security Gilad Erdan with the Minister of the Interior of the Republic of Croatia dr.sc. Davor Božinović, where the strengthening of cooperation in forensic experience exchange between the two states was discussed and agreed upon, the expert delegation from the Forensic Science Centre „Ivan Vučetić“ of the Croatian Ministry of the Interior, led by its director Andrea Ledić, visited the israeli colleagues from the Division for Identification and Forensic Sciences (DIFS). DIFS is one of the leading forensic institutions in the world with significant experience in all fields of forensic science.

Besides the experts from „Ivan Vučetić“ Center, the Croatian delegation also included Professor Dragan Primorac, initiator of the fruitful coperation between the two institutions and a representative of the American Academy of Forensic Sciences, and Assistant Professor Saša Missoni, director of the Institute for Anthropological Research, who was particularly focused on the field of forensic anthropology.

The visit to the Israeli DFIS began with a meeting with Mrs. Myriam Azoury, Chief of DIFS and the most famous Israeli forensics professor, Professor Yossi Almog, who has received numerous awards in the field of forensic science, including the prestigious “Lucas Medal” of the American Academy of Forensic Sciences (AAFS).

Chief of DIFS, General Azoury, used this opportunity to present the new structure of DIFS, developed according to the so-called “CSI concept” of the Israeli police. She emphasized the significance of the collaboration between police officers working on the field and the experts handling the material traces afterwards. Chief Azoury emphasized that “the foundation for the promotion of excellence in forensic science is the continuous, life-long education of staff which can be accomplished by raising the academic level and participating in different scientific projects”.

The exchange of experiences, best practices and common challenges of the two respectable forensic institutes were discussed during the meeting. In addition, specific forms of future cooperation were defined, starting with a return visit of the DIFS delegation to the Forensic Science Centre „Ivan Vučetić“ of the Croatian Ministry of the Interior.

Visit of the Croatian Economic Delegation to the State of Israel

Shimon Peres, No Room for Small Dreams, launch of the Croatian edition

Popular Posts
CIBC Copyright 2019 - All Rights Reserved
Back To Top
×